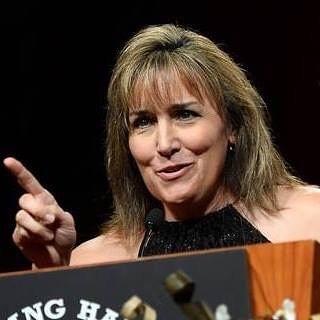 Born a Coal Miner’s Daughter, Christy was raised in a small town in southern West Virginia she began playing sports early with her love for competition evident at Concord College where she played basketball while earning a Bachelor of Science degree in Education. During college she entered a Toughman/Toughwoman contest, and became hooked on boxing, thus starting what would be a life long journey.

In 1993, Christy signed a promotional contract with world renowned boxing promoter Don King. She started boxing on some of the biggest pay-per-view cards in the sport, headlined by Hall of Famers Mike Tyson, Julio Caesar Chavez, Felix Trinadad and Evander Holyfield. An exciting and bloody victory on the undercard of the heavyweight championship bout between Mike Tyson and Frank Bruno landed her on the cover of Sports Illustrated (April 15, 1996). Christy’s fame skyrocketed, leading her to appearing on The Tonight Show with Jay Leno, an episode on the Roseanne sitcom along with many other high-profile shows on the television show circuit. 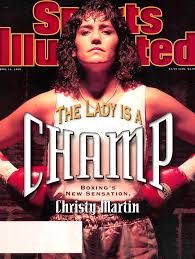 Over the next eight years Christy fought in some of boxing’s most famous arenas, including Madison Square Garden and Caesars Palace. Places that had not previously hosted women boxing. One of her greatest honors came in 1996 when one her training sessions was opened to the public and held in the heart of Time Square, closing the famous Manhattan landmark to a delighted and packed adoring New York City crowd. Christy was also the Grand Marshall for The International Boxing Hall of Fame induction weekend in 1996 and a repeated guest for the next several years.

The entire time Christy enjoyed her own success, she owned and supported a boxing gym in Orlando and then moved the gym to Apopka, Fl. She was named the Florida Coach for the Golden Gloves team that traveled to compete in the national tournament in Salt Lake City, Utah 2008.

In November of 2010, Christy was a victim of a severe domestic violence attack in which she was stabbed repeatedly, shot and left for dead by her then husband, Jim Martin who is now serving 25 years in prison. The attack also ended three years of an addiction to cocaine, which she had turned to during her bouts with depression in order to endure the years of physical and mental abuse she had been privately dealing with during her marriage. She has turned much of her focus to speaking out against domestic violence and trying to help victims and survivors regain their life confidence.

Christy’s Champs is a non-profit that will assist victims and survivors of domestic violence. Recently, Christy’s Champs joined forces with Turning Point Domestic Violence Center and Shelter to provide a program that will help the children of victims and survivors, as well as survivors themselves. The program will consist of boxing, MMA and life training with emphasis on life training. The same program is gaining ground in Harnett Co, NC with Mark Hornsby as the lead. Computers have been donated by Christy’s Champs to the gym to assist the kids with their school work.

Christy’s life story has been written into a major motion picture with screen writer Katherine Fugate. Amy Schumer has shown interest in portraying Christy on the big screen. The movie will focus on the barriers broken, the rise and stardom of the women’s boxing legend while simultaneously depicting Christy’s personal fall and life struggles in and out of the ring. Netflix and 48 Hours are both preparing a documentary for release late 2020 or early 2021.


Missing both eyes, Nozawa has had to get used to moving about indoors and out. Shortly after the shooting and recovery, he realized that he desperately needed help learning to navigate so he signed up for Washington State’s Department of Services for the Blind.

“Dreams do really come true, but you have to believe it before you can see it,” he said. He has made his own dreams come true by helping others pursue their life aspirations. In his free, 14-page book “Precipice of Potential,” which can be downloaded from his website at www.drrandallgeorge.com, Nozawa asks provocative questions to help readers examine their own lives more closely like “What do you do that fills you with joy and excitement?” “When is the last time that you gave, something, anything, freely without expecting anything in return?” “What did you do with your last 20 dollars?” Certainly food for thought.
Folks who want more information may e-mail the doctor at
Mirabelle.nozawa@gmail.com
GO HERE TO FIND OUT MORE ABOUT DR RANDALL GEORGE NOZAWA:
https://drrandallgeorge.com/?fbclid=IwAR12mPf03ux3ueTnO6lksrdBmsrTRpcHlhY5Nw6gcoGXzxl33P-cvEgVgD0
Posted by Bob Charles at 7:58 AM